It is one of the world’s biggest health threats. Now, a small Norwegian company may have found a super weapon in the fight against antibiotic-resistant bacteria.

“A global threat to health,” writes US health authorities . “One of the ten greatest health threats facing humanity,” writes the WHO . “A serious risk to our future health,” writes FHI . 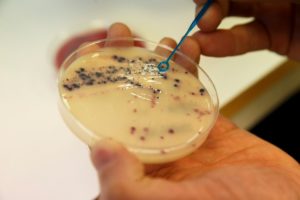 RESISTANT: Antibiotic-resistant bacteria are becoming a huge problem, a Norwegian company will do something about it. Photo: Cornelius Poppe (NTB)

Antibiotic-resistant bacteria are perhaps the greatest threat to humanity. In 2050, it is expected that more people will die from infections as a result of antibiotic resistance than from cancer.

Now, a Norwegian company has taken up the fight and offers a solution.

– This is often referred to as the next big pandemic, and therefore we want to develop products that remove such infections, says CEO Geir Almås of SoftOx Solutions to Nettavisen Økonomi.

– If we succeed in this, it will be the next big discovery in infection treatment since the discovery of antibiotics. It’s the biggest health revolution we’ve ever had.

The Norwegian company SoftOx Solutions is researching and developing an infection remover called Biofilm Eradicator. The project aims to develop an alternative treatment for infections in chronic wounds. In many cases, it will replace traditional antibiotics.

– As a result we can deal with infections with a new and broad-spectrum product that will be an important supporter of antibiotics, he says.

Almås says they have discovered that if you combine two acids, acetic acid and hypochlorous acid (used to purify drinking water and swimming pools, editor’s note), the solution develops a unique ability to penetrate biofilm.

Biofilms are bacteria that clump together and prevent the wound from healing. This makes the bacteria resistant to both antibacterial agents and the body’s defense mechanisms against bacteria. Thus, antibiotics do not work.

The biggest problem with today’s antibiotics, which had its major breakthrough during World War II, is the development of resistance: Over the past 75 years, bacteria have learned to defend themselves, so that antibiotics stop working. This is often due to the biofilm.

– The World Health Organization has stated that we are in a post-antibiotic period, the period when antibiotics have stopped working. This will become more and more serious in the years ahead. We may risk that a small wound can be fatal, warns Almås.

He says 95 percent of all bacteria live in a biofilm. They live so close together that they can transmit antibiotic resistant genes between them if they need protection. In this way, so-called superbugs are created. Each bacterium has resistance to several different antibiotics, and in the worst case, all known antibiotics stop working.

Chronic ulcers occur in 1-2 percent of the world’s population, ie in 80-160 million. Over 60 percent of chronic wounds have such biofilms. An important key to wound healing is to remove the biofilm infection, which prevents the wound from healing.

– Today we surgically remove the diseased tissue in the wound. With our method, the process  will be the same. But by using our product after the procedure, you remove the entire infection and thus avoid having to use antibiotics, which in the worst case triggers new resistance.

– It is not a question of a pill, but a liquid with which you soak a bandage and which is then applied to the wound, Almås says.

– The advantage is that it works completely locally at the same time as it preserves the bacterial flora the body wants to take care of. We can also imagine other applications, such as on the lungs and hands. It will be the same principle, but it will be applied in a slightly different way. No one is more broad-spectrum than us without triggering the development of resistance, claims Almås.

The risk of serious side effects is always central to the development of new drugs. Almås says that what is very positive about the testing so far is that the infection remover has not delayed such healing in animal experiments.

– In addition, our solution is very environmentally friendly. This is a very kind product that uses the body’s own substances, hypochlorous acid, as well as acetic acid. It is a natural acid that can, among other things, occur when fruit rots, says Almås.

In Norway, we have used fewer antibiotics than in many other countries. This was a topic during the COVID-19 pandemic this spring and was offered as one explanation for why mortality, for example, was much higher in a country like Italy.

– COVID-19 attacks the immune system and creates open wounds in the airways. In many hospitals, there are natural occurrences of resistant bacteria, and the lungs are thus infected with resistant bacteria. Then you are quite helpless, as traditional antibiotics stop working. The patient thus gets several infections where today’s antibiotics do not work, says Almås.

– Should we in Norway be concerned about the numerous resistant bacteria?

– We are better than other countries, but, yes, we should be seriously concerned. We live in a small, open economy, where it is very easy to bring resistant bacteria home from abroad.

Antibiotic-resistant – bacteria – is therefore one of the biggest concerns we have. Almås says antibiotics are a very basic treatment in what we do in the health care system. We depend on antibiotics to fight infections.

But the new treatment principle will not work against all infections. Almås says that for some infections antibiotics will still be an alternative, for example in blood poisoning. The new infection remover cannot contribute there.

However, the company’s international partners have great faith in the project. The project is a research and development collaboration between SoftOx Solutions and leading American and European wound clinics.

SoftOx announced in early November that the US Department of Defense had allocated the company a meager $ 2 million. It is to be used for the clinical development of the infection remover for chronic wounds.

The Danish Medicines Agency has given its recommendation for further studies with a consideration to treating respiratory infections, including COVID-19.

– What are we talking about in terms of time, when can the new remover be ready in the market?

– I think three years is realistic to develop the infection remover for use in chronic wounds. In the first phase, we test this on animals to find the right doses and that they are effective. We have managed this by a good margin without damaging the wound healing.

– When it comes to the product for the treatment of respiratory infections, we expect to start studies in humans in the second quarter of next year, Almås answers.

Read the whole article on nettavisen.no